The story of Split is already 17 centuries old, dating to the time the Roman Emperor Diocletian decided to build his Palace right on the peninsula near the great Roman city Salona, where he wanted to spend the last years of his life. During these 1700 years the Palace slowly turned into a city, which to this day lures with its rich tradition, glorious history and beauty of its natural and cultural heritage.

Split lies on the Adriatic coast, central Dalmatia, on the Split (Marjan) peninsula. Although surrounded by sea as a peninsula, Split also borders with surrounding mountains, Mosor on the northeast, Kozjak on the northwest, and Marjan hill as one of the most important symbols of the city, rising on the west side of the peninsula, in the immediate vicinity of the old city centre. Split is also surrounded by the islands Brač, Hvar, Šolta and Čiovo.

The Marmontova apartments & rooms is located at 5 Marmontova Street, in the old town area of Split City 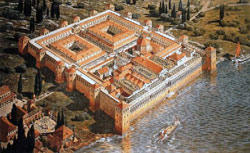 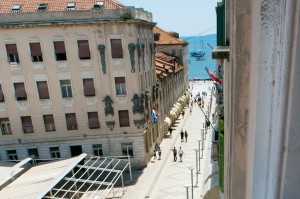 Split through the seasons

Thanks to the Mediterranean climate, winters are mild in Split, lasting from December to March, although the actual experience of winter can really be felt only in February. For this reason all the comforts of Split can be savoured for most of the winter, from sightseeing the Diocletian Palace to the tastings of all the delicacies in numerous restaurants, and at the Christmas fair on the Riva during the entire December Christmas holidays. It is not even so unusual to spend sunny winter mornings sitting on the café terraces.

Spring in Split lasts from March to June, and it is one of the best seasons to visit Split. The average temperature is the ideal 20°C, abundant in sunny periods ideal for walking on Marjan, excursions, and even swimming in the late spring. During this season Split begins its life in the open, it is the waking moment of its streets and city squares.

Although high temperatures characterize the summer in Split, sometimes even over 35°C, spreading from June to the end of September, you can find refreshment in the beautiful Adriatic sea on many of Split’s beaches or on the nearby islands, while during the summer nights you can unwind through different events, such as the Days of Diocletian, Split summer festival and many others, where everyone can find something for themselves, and where you will experience a true Mediterranean hustle and bustle.

Autumn in Split lasts from September to December, although not a favourite part of the year to some, in many ways it is the most beautiful time of the year to visit Split, especially at the end of September and in October. It is the time when the temperature of the sea is ideal, the summer heat is at its low, and the main season is still on.